Book Talks About Aquinos’ Legacy: Is It Time To Revisit It?

A book contends about the legacies of Benigno Aquino Jr. and former Pres. Corazon Aquino.

Book entails in its pages the legacies left behind by the Aquino couple, Benigno ‘Ninoy’ Aquino Jr. and former Pres. Corazon ‘Cory’ Aquino.

The ‘Aquino’ is one of the most prominent surnames in the Philippine History. There are Filipinos who see ‘Aquinos’ as the light as Cory Aquino became the president after Marcos Regime.

The late Ninoy Aquino is also noted not just as a man who lost his life upon his arrival in the now-known as Ninoy Aquino International Airport but also to some, a hero. 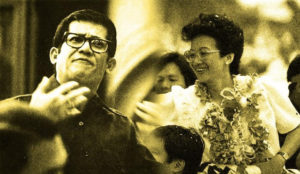 On the 33 years since Ninoy Aquino breathed his last upon arriving in the Philippines, a book entailing the legacy of Ninoy and Cory is deemed to be timely as reported in the Inquirer.