BPO Industry in fear and worried about losing jobs in the Philippines.

BPO Industry in fear and worried that about million of call center agents could lose their jobs because of Duterte.

According to a report of ABS-CBN news, the business process outsourcing (BPO) industry in the country are worried that they could lose their jobs because of Duterte strong statement against international allies,such as the US. 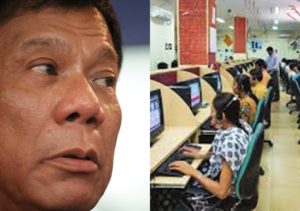 This was confirmed by Senator Panfilo Lacson who gave a strong warning to the advisers of the President to properly advise the latter that it won’t do any good for the Philippines to sever ties with the US.