Duterte Ready to Talk to Obama on Human Rights Issue

President Rodrigo Duterte said Wednesday he is willing to meet with United States President Barrack Obama at the sidelines of the ASEAN Summit to be held in Laos on September 6.

This was the statement of the President after the White House said there is a possibility on the meeting of Obama and Duterte on the sidelines of the summit next week. 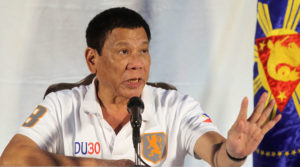 “We absolutely expect that the president will raise concerns about some of the recent statements from the president of the Philippines,” White House Deputy National Security Adviser Ben Rhodes told a media briefing when asked whether inflammatory remarks by Duterte about women, journalists and others would be a topic of discussion.

In a press briefing on Wednesday, Duterte was asked about the topic.

He said he is open to discuss any issue with Obama, including the human rights issue in the Philippines.

“He can wish [to discuss] any topic at all. I’m ready to talk to him,” said in a news briefing at the Ninoy Aquino International Airport (NAIA).

On the same day, Duterte welcomed 130 overseas Filipino workers (OFWs) repatriated from Saudi at the expense of the government after they were retrenched by Saudi-based companies due to drop on oil prices in the world market.

Duterte was asked if he was okay to discuss human rights issues in the country. He said Obama should listen first to him and understand the recent situation in the Philippines before they could proceed and discuss the issue.

“It depends to what degree because they must understand the problem first before we talk about human rights. I would insist, listen to me. This is what the problem is. Then, we can talk about the UN. No problem,”Duterte said.

Last week, the US State Department said it was “deeply concerned” about reports of extrajudicial killings in the country.

In the recent report of the Philippine National Police, almost 800 persons linked as drug users and pushers have already died amid the campaign against illegal drugs.

Celebrity Gowns Options For Your Classy Look On Graduation Ball