Duterte Insists Abuses of Ex-President Marcos Not Yet Proven

Duterte will not change his decision allowing the Marcos family to bury the remains of the late president Ferdinand Marcos at the Libingan ng mga Bayani, despite accusations on abuses during Martial Law.

Philippine President Rodrigo Duterte insisted that the abuses of the ex-president Ferdinand Marcos dictatorship is not yet proven.

This was the remarks of the chief executive following mixed reactions of the Filipinos on the decision of the Supreme Court to allow Marcos be buried at the Libingan.

According to him, this is an issue that cannot be determined at this time but has to have a history first. 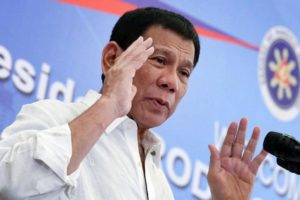 At a brief press conference on Wednesday afternoon, Duterte maintained that his order to bury Marcos at the Libingan, literally the “Cemetery of Heroes,” was based on what the law says, that “soldiers and ex-presidents, ‘yung namatay, doon ka ililibing (those who have died, you will be buried there).”

“Now the question about the dictatorship of Marcos is something that cannot be determined at this time,” he said. “It has to have history.”

Duterte also gave his stand on the events leading to, during and after the dictatorship, on the Marcos regime.

He called it “a political fight initially that turned sour because of the power struggle of the ruling political families in this country” and “deteriorated into something almost like a revolution.”

Duterte insisted that it has yet to be proven by a competent court if there were abuses committed during Marcos’ 14-year dictatorship.

“But as far as the right and privilege to be buried sa Libingan ng mga Bayani I simply follow the law,” he said. “Wala na tayong magagawa diyan (There is nothing we can do about that).”

He confirmed he gave go signal to the Marcos family when they plan to bury the late president.

Duterte said former Senator Ferdinand Marcos Jr. asked him during the commemoration of the third anniversary of super typhoon Yolanda in Tacloban on Tuesday: “Can we now proceed?”

“Yes, you can … I will not take my word back,” Duterte said.