A one-year period of mourning has officially declared in Thailand following the passing of King Bhumibol Adulyadej.

The 88-year-old Bhumibol, the world’s longest-reigning monarch, died in hospital in the capital Bangkok on Thursday due to illness.

The Southeast Asian nation of 67 million people plunged into grief even the King had been in poor health for several years already.

On Friday, crowds of people have taken to the streets wearing black to publicly grieve Adulyadej’s death. This is 12 hours after news of the king’s death broke, but shops opened for business.

In the afternoon, the King’s remains was brought to the nearby palace complex where crowds of mourners lined up pavements along the route of a royal motorcade that bear the king’s body from the hospital.

Thousands of other residents, waited at the palace compound. Many of them were holding his portrait while mourning the loss of the country’s beloved king. 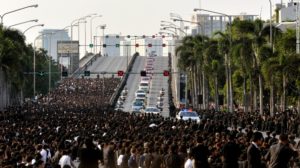 Some who gathered outside the hospital fainted in the heat while crying and were carried away on stretchers.

At the palace, the Crown Prince Maha Vajiralongkorn presided over the bathing of the king’s body, a traditional Buddhist funeral rite.

This will be followed by months of palace rituals, including at least 100 days of chanting by the monks in Thailand.

Crown Prince Maha Vajiralongkorn is expected to be the new king, but he does not command the same adoration that his father earned in the country over a lifetime on the throne. 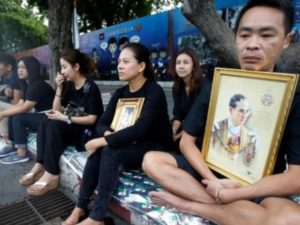 Prayuth said Vajiralongkorn wanted to grieve with the people and leave the formal succession until the time when the parliament will invite him to ascend the throne.

At the age of 88, Adulyadej is being considered as a revered and unifying figure in Thailand who embodied the nation in his 70-year reign.

Over the weekend, the king underwent medical procedures.

The Royal Palace released an announcement about his passing through a statement read on state TV Thursday, following days of outpouring of support and prayers from the Thais since the king was hospitalized.

The king died at 3:52 p.m. local time and passed away in a “peaceful manner,” the Royal Palace said.