Pres. Duterte warns he will do something in the forum if Pres. Obama will question him over human rights issues.

DUTERTE WARNS – Human rights is one of the expected concerns that will be raised by U.S. Pres. Barack Obama on his supposed meeting with Pres. Rodrigo Duterte which was announced last week.

Recently, a news update from GMA News contend the Philippine President’s statement before he flew to the Lao capital Vientiane for the Association of Southeast Asian Nations (ASEAN) Summit.

With regards to the possibility that the U.S. President will raise the issue of EJK in their supposed meeting, Pres. Duterte affirmed in the report that his response is only for his fellow Filipino people. 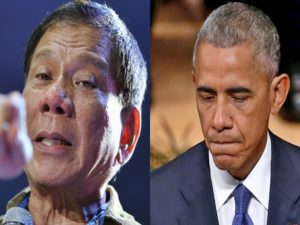 “I do not respond to anybody but to the people of the Philippines. Wala akong pakialam sa kanya. [I don’t care about him] Who is he?” he told the reporters.

See also: Donald Trump Airs Out In Social Media His Side On Duterte’s Remarks To Obama