The oldest living person in the world swears by raw eggs every day.

Emma Morano, the oldest living person in the world, has celebrated her 117th birthday in Italy on Tuesday, November 29.

Morano was born on November 29, 1899 and was raised in the city of Vercelli in Italy, however, she moved to the northern town of Verbania soon after, where she has lived ever since.

On May 16, 2016, Guinness World Records confirmed her as the world’s oldest person. During that time, Morano was 116 years and 169 days old. 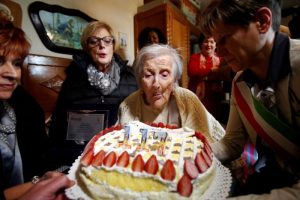 The supercentenarian is believed as of now to be the last surviving person in the world born in the 1800s.

Her life has spanned three centuries, two World Wars and over 90 Italian governments.

In reaching the said age, the 117-year-old Morano followed the same diet for about 90 years of three eggs a day — two raw, one cooked — fresh Italian pasta and a dish of raw meat.

On Tuesday, friends, neighbors and Morano’s doctor gathered in her small apartment in the northern town of Verbania, on the shores of Lake Maggiore, to mark the latest milestone.

The visitors presented her with a large white birthday cake.

She happily accepted some gifts, including her favourite cookies, which she ate with some milk.

Then she blew out the candles on her cake but three numerals to show her age, 117, and quipped, “I hope I don’t have to cut it!”.

To the well-wishers who gathered, Morano said, “I am happy to turn 117.”

“Who would have said it?,” her doctor, Dr Carlo Bava, remarked.

“When you were young everyone used to say you were weak and sick.”

“My life wasn’t so nice,” Morano told Reuters TV as she sat in an armchair by her window.

“I worked in a factory until I was 65, then that was that,” she added.

Five years ago, in an interview with La Stampa newspaper, she said her fiancé had died in World War One and that she had then been forced to marry a man she did not love.

“‘Either you agree to marry me or I will kill you’,” Morano said, recalling his proposal. “I was 26. We got married.”