Interment Of Marcos Sr. At Libingan Ng Mga Bayani: Open To Those Who Are Against It

The interment of the late dictator Ferdinand Marcos Sr. at Libingan ng mga Bayani on Sept. 18 would be open even to oppositions.

INTERMENT OF MARCOS SR. – After years of continues debate about the resting place that fits the late dictator Ferdinand Marcos Sr., finally a go signal from President Rodrigo Roa Duterte tries to put an end to it.

With regards to the issue on whether Marcos Sr. fits to be laid down at Libingan ng mga Bayani, victims of human rights were against it while those who value his being a soldier and a former president would want to allow it.

During the campaign period, President Duterte has been vocal that he is on the side of allowing it. He further justified that the late dictator was a soldier which gives him the privilege to be laid down at Libingan ng mga Bayani. 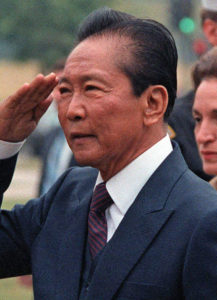 Despite the go signal given by the President recently as stated in a previous report, still a lot can’t get enough of the issue. Oppositions still have not surrendered their stand.