The chief of the Pangasinan Police Provincial Office released statement on the reports that they are transferring Ronnie Dayan.

Last week, Dayan, who admitted he had a relationship with de Lima faced before the hearing of the House Committee on Justice where he testified receiving drug money on behalf of the senator.

On Monday, Lee said they have transferred Dayan only once. 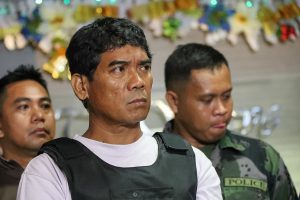 Earlier, Philippine National Police chief Director General Ronald dela Rosa said he will leave it up to the chief of the Pangasinan PPO how he would secure Dayan.

“I leave it to them, yung provincial director ng Pangasinan, kung paano niya i-secure.  It is up to him kung paano i-secure para siguradong hindi madisgrasya,” Dela Rosa told reporters.

There are previous reports saying Dayan is being transferred to different safehouses every hours for his security.

According to Lee, Dayan is living a “normal” life in his safehouse in Pangasinan province over the weekend.

A photo released by the Pangasinan Police District shows that Dayan is smiling and clutching a guitar with a “Duterte” sticker on it.

Pangasinan PPO chief that the said guitar was owned by a member of the security team for Dayan and that he borrows it once in a while. Dayan was also provided with a videoke machine in his safehouse.

Dayan was arrested in La Union Tuesday morning after months of hiding after the House of Representatives ordered him arrested for contempt for failure to attend their investigation on the illegal drug trade inside the New Bilibid Prison where de Lima is allegedly connected.