Comelec Chairman: “Kodigo” Allowed in Voting Precincts on May 9 Elections

Kodigo: allowed in poll precincts according to Comelec Chair.

Chairman Andres Bautista of the Commission on Elections (Comelec) said in a radio interview with dzBB that bringing “kodigo” inside voting precincts is allowed on election day, May 9, 2016. 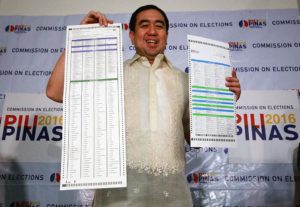 The Comelec chief noted that voters should not rely on the sample ballots during the poll. He urged the voters to make a list for a hassle free voting.

Meanwhile, President Benigno Aquino III declared on Monday, April 25, 2016 via Proclamation No. 1254 that May 9, 2016 will be a special non-working holiday to allow Filipinos “exercise their right of suffrage” in the upcoming local and national elections.

“President Aquino signed on Monday, 25 April 2016, Proclamation No. 1254, declaring May 09, 2016 as a Special Public (Non-Working) Holiday throughout the country to enable the entire citizenry to participate in the national elections and ‘to properly exercise their right of suffrage,’” Communications Secretary Herminio “Sonny” Coloma Jr. said based upon an article published by Inquirer.net.

The casting of votes according to Commission on Elections (COMELEC) will be done from 6 a.m. to 5 p.m. only.

What can you say about this?

Share us your thoughts by simply leaving on the comment section below. For more news and latest updates, feel free to visit our site often. Thanks for dropping by and reading this post.