Team Azkals Off to Bishkek for Friendly Game vs. Kyrgyzstan

Despite injuries some players had and key players absent, the Team Azkals flew to Bishkek for a friendly game.

As a part of the preparation for AFF Suzuki Cup in November, the Philippine national football team had flew to Bishkek for a friendly game against the national team of Kyrgyzstan.

The national team will be embarking on a 28-hour journey to Bishkek via Bangkok and Astana.

Some players of the team were hit with injuries , while some key players were absent, but still the game must go on. 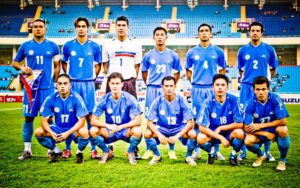 Even they were hit by the situation, the Philippine Azkals hope to give their AFF Suzuki Cup buildup a positive turn in a clash against higher-ranked Kyrgyzstan team.

The match will be held on September 6, and this marks the start of the preparations for the prestigious biennial tournament in November this year.

As the Azkals skipper, Phil Younghusband sees the team getting an improvement just by playing a foe ranked No. 105 in the world.

Their tavel will be more than a day long, hence, the players must adjust on the flight.

“Its never easy to travel that long and be 100 percent, but we have to make sure that when we get there, we have to give the best possible chance to get a result,” said Younghusband.

Before they flew to Bishkek, the Team Azkals wrapped up their final training session at Rizal Memorial Stadium.

“We haven’t got a lot of time there. It will be a good test because its difficult opposition and if we want to be stronger for the Suzuki Cup, we have to play against strong teams”, Younghusband added.

Azkals coach Thomas Dooley brought with him 21 players for the trip to Bishkek with goalkeeper Neil Etheridge and they are expectec to land in the Kyrgyzstan capital on Sunday.

Some players will not be able to play versus Kyrgyzstan. Veterans Simone Rota and Patrick Reichelt are also sidelined until the Suzuki Cup, while Stephan Schrock did not make the trip due to personal reasons.

For the incoming AFF Suzuki Cup, the ex-national team star Chieffy Caligdong has been appointed to the Azkals coaching staff.

Azkals manager Dan Palami said Caligdong will start working with the team in October when it plays Bahrain in another friendly match at Philippine Sports Stadium.

UCPB AUTO LOAN – How Much You Can Borrow Under This...